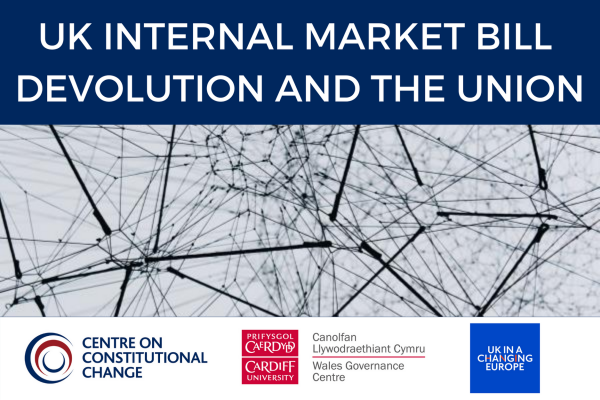 New rules on the UK’s internal market will undermine devolution and create distrust between the governments of the United Kingdom, according to a new report from Cardiff University and the University of Edinburgh.

A team of academics at Edinburgh’s Centre on Constitutional Change and Cardiff University’s Wales Governance Centre have delivered the report as the UK Government’s Internal Market Bill begins its second reading in the House of Lords.

The Internal Market Bill has been met with strong criticism by the governments and parliaments of Scotland, Wales and Northern Ireland, and the new report answers ten different questions around the content of the Bill, concluding without any doubt that the Bill:

The report says that the Bill is likely to proceed without the consent of the Welsh, Scottish and Northern Ireland legislatures, further straining relationships within the UK, and that a case exists for withdrawing it and starting over again.

Professor Nicola McEwen, of the University of Edinburgh, commented:

“The effect of the UK Internal Market Bill is to significantly undermine the purpose of devolution, which was to enable the devolved nations to legislate according to their own local needs and political preferences.

“By introducing uncertainty over new UK Government spending powers in the devolved areas, and by limiting the ability of the devolved governments to pursue their own policy priorities, the Bill is more likely to undermine rather than strengthen the union, and creates the space for political conflict, grievance and a breakdown in inter-governmental relations.”

“With relations between Westminster on the one hand, and Cardiff and Edinburgh on the other, as fractious as they have ever been, there is clear merit in exploring a more consensual approach to the regulation of the UK Internal Market. The Bill is being perceived as a power grab by devolved ministers, is extremely unlikely to secure devolved consent, and unsettles the territorial arrangement of the UK constitution.

“We are not convinced that this Bill is necessary at this time. However, substantial changes to the Bill could begin to repair the damage it has caused, if they embed principles of consent and co-operation in the process of governing the UK’s internal market. The Welsh Government has proposed amendments that, for example, remove the proposed new financial assistance powers, remove the reservation of subsidy provision to the UK Government and would mean the Internal Market legislation would not be a protected enactment. Our report makes recommendations that could minimise the Bill’s detrimental impact and help towards rebuilding relationships between the governments of the UK.”